Firstly, I’m sorry about the tardiness of this blog. It’s been a very hectic few weeks that I haven’t had the time. It’s at times like this I realise what benefits being a professional athlete would give me: time to blog. I guess another contributing factor was that my race was a bit ‘meh’. I mean it wasn’t awful – and signs of improvements were there – but it’s impossible not to compare it to the same event 2 years prior where I ran 50 seconds faster.

Anyway, the race. I was prepared to be caught in two minds early on in this race. Mind 1 was to go out with the lead group, and perhaps suffer the harsh pace I wasn’t in the shape to go with. Mind 2 was sit in the 2nd group, and feel like I was being a bit soft, but probably a better reflection of my form. So as I expected, I got caught between the 2 for the first 3k. The pace of the lead group quickly felt a bit uncomfortable and so I was basically waiting for group 2 to catch me up so I wasn’t too exposed. 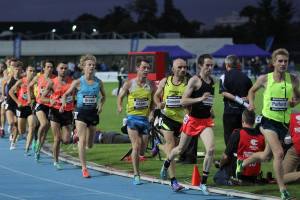 The pace shouldn’t have felt too hot at the front though – I went through 3k in about 8.50 and at that stage didn’t think I’d even break 30mins. I didn’t feel good at all. When the 2nd group caught me I let training partner Brad Milosevic lead for a few laps so I could sit in and regroup. We hit 5k in about 14.50 and I felt a bit better, but the pace was slowing. I shared a few laps, and then Brad also did. No-one else in the group showed any inclination to do any work at all. You know who you are…

I felt bad for Brad doing the pacing – and he had more chance of a PB than me so I took to the front with 7 laps to go and tried to push things on a bit. I was actually starting to feel a bit better and the pace picked up from 71/72s to 69-70s. With 2k to go I was starting to get a gap on the group behind me and had a couple casualties from the lead group to chase. My 24th lap was a 66, but still had about 3 guys within a few secs of me, including Steve Dineen who I had just overtaken. A 64 last lap held them off and I finished in 8th in 29.30.

Given how I felt at 5k, this wasn’t a bad result. I was hoping for 29.15ish so I wasn’t too far away, so I guess I’m happyish with the race, just not too happy with my general shape at the moment.

It was great to see another training partner James Nipperess execute on his good training form and pop out a 28.54. 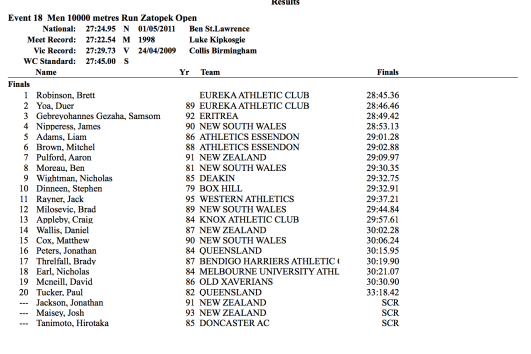