This week was largely about getting rid of this calf injury and building up the running again. I was pleased it healed very suddenly towards the end of the week and I could do the trail run on Sunday – albeit only the 20km, and not the 30km option I had initially intended to do. Hopefully now I can push on and train properly again!

Monday – 35 mins easy. Calf wasn’t too sore, but uncomfortable. Probably a 3-4/10 on the pain scale but was starting to get slightly worse towards the end.

Tuesday – REST. Gave the calf another day to recover.

Wednesday – 35 mins easy. A slight improvement on Monday. Didn’t get worse as run went on. 3/10 for pain.

Thursday – 35 mins easy to compare to yesterday. Exactly the same, so not getting worse.

Friday – 45mins easy. No pain! All of a sudden it seems to have pretty much disappeared. Could even run close to 6min miling towards the end feeling fine.

Sunday – Botany Bay 20km. Amelia was running this race so I thought I’d do it as my Sunday run, which I was going to try 90mins for today anyway. Initially I would have done the 30km run, but with the calf issue I scaled it back. The run starts out and back along the beach and I let a few go as I eased into the run, and I ran at about 6min milling so wasn’t anything that would hurt the calf. After 8km or so I was at the front with one other guy, and we ascended onto the sandy narrow trails, and some slightly rocky sections on the coast. The running was quite slow 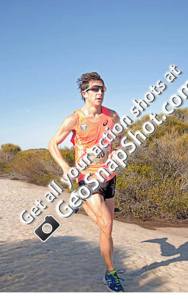 Running along the Sandy Trails of Botany Bay!

along here, as it was so narrow, and slightly uneven underfoot. There was a pretty tough section up a sand dune but after that it was pretty good going. I didn’t push the pace and just focussed on following the pink tape in the bushes, which wasn’t always easy to spot! I got a bit of a gap as the race went on, but lost almost all of it as I followed someone from the 30km race which started before me who had gone the wrong way right at the end of the loop and so I actually ran straight past the finish line! I think I did an extra 800m or so but managed to just finish in front, gaining $200 for a narrow 20 second victory. The calf gave me no problems at all which is the important thing and Amelia outsprinted an old man which was exciting to watch!